There’s something special about the fifth scale degree of the tonic (major) key when raised a half-step. Granted, there’s something special about every non-key pitch in a tonal system, but what really captivates me about the flat six is its affective power in a Romantic context. Take a minute to listen to this excerpt: what do you feel when you hear the horn make its solo entrance above the sustained bassoon and strings? (May want to turn up your sound.)

It’s magical, isn’t it? I’m really at a loss to describe it any other way.  It’s as if you’re standing atop a cliff overlooking the ocean, peering into a mass of storm clouds brewing off in the distance, when suddenly out of the corner of your eye you catch a glimpse of sunlight starting to filter its way down through a small gap in the clouds. Horn II, entering on middle C, captures that initial feeling of wonder and bewilderment. When Horn I echoes an octave higher, the feeling is similar, but carries with it the excitement of a warranted suspicion or curiosity. 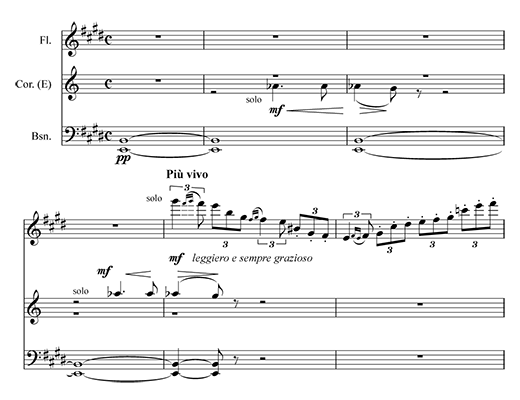 The excerpt is from the opening of Rachmaninoff’s fantasia for orchestra, The Rock, Op. 7.  The lower strings (omitted in the image) and bassoons suggest E major as the home key, so C-natural (or enharmonically, B-sharp) is our raised fifth.  The flute too follows the contours of an E major scale, but picks up a B-sharp/C-natural or two along the way.

Perhaps the effectiveness of the raised fifth lies in the fact that it forms an augmented triad sitting squarely between the tonic and its relative minor.  In the above passage for instance, the tremolo in the violins below the flute line oscillates steadily between B-natural and C-sharp, necessarily visiting C-natural along the way, and as a result, creating a conflation of E major and C-sharp minor over the course of the phrase. Actually a pretty common pattern in tonal music.

Raising the dominant pitch or lowering the sixth, almost surreptitiously like this, is a device that shows up pretty often in modern film music too, in order to achieve an effect similar to what I tried to describe with my terrible sunlight-through-the-clouds metaphor. At the very end of John Powell’s score to X-Men: The Last Stand, a trombone can be heard voicing an F-natural just as the rest of the orchestra settles into an A major chord. Listen for it at around 0:18-0:21, just before the suspended cymbal washes over everything (might be loud if you had your speakers turned up for The Rock).

As a result of mulling over this idea in my head, I’m starting to hear it more and more in a lot of other pieces: Rachmaninoff’s Spring cantata and John Knowles Paine’s overture to As You Like It, to name a few. I’d like to revisit those pieces in this context some time later. To be clear though, there’s a difference between overtly stating an augmented triad and just subtly sneaking in a raised fifth here and there. The former can be a discrete, indispensable stage in a harmonic progression; the latter is more of a musical device for adding or enhancing color.