The term descant hearkens back to my youth as a choir boy, when my musical experiences were dominated by music of the church.  We sang a number of hymns and psalms, and our director would often select a small group of us to sing a descant — known to me then only as an aria-like soprano part above the rest of the choir. It forced us to exercise the upper range of our voices and was very unforgiving of even the slightest deviations in pitch.  It was sung entirely on the syllable “ah” and, as I remember it, committed to being neither a central nor merely peripheral voice in the choir.

I’ve developed a fondness for most anything resembling a descant now because of the way they transform the roles of the other voices in a piece.  They are ornamental, but you can also fixate on them, since they are, by definition, counter-melodies. Traditionally, I think the term has ecclesiastic roots in hymnal music, but it has come into use to generally denote a counter-melody above and removed from the other voices.

In a choral setting, a few sopranos seem to be the natural choice for a descant part.  In the symphony orchestra though, the choice depends on what makes sense from the standpoint of orchestral color and texture.  In a passage dominated by woodwinds for example, I think the clarinet makes a terrific descant instrument, for reasons that are more or less subjective.

In a tutti section, the descant role is more demanding.  A woodwind instrument will not carry enough sound.  Twenty violins can produce the sound, but in Western classical, Romantic music, chances are the composer has charged the upper strings with the melody.  I also feel that we have been conditioned to hear violins en masse as heralds of melody, so to avoid confusion, we best not afford them the part.

The idea of the horn behaving as a descant instrument occurred to me recently as I was listening to Rachmaninoff’s Symphony No. 2 (though the very existence of descant horns may also have had something to do with it).  The opening movement, an expanded sonata form movement, is an exercise in counterpoint and a testament to the composer’s expertise thereof.  In the second group of the exposition, the first and second violins carry the melody in octaves, but they are accompanied by one of my favorite instances of non-soloistic horn writing.  I’ll let the parts speak for themselves: 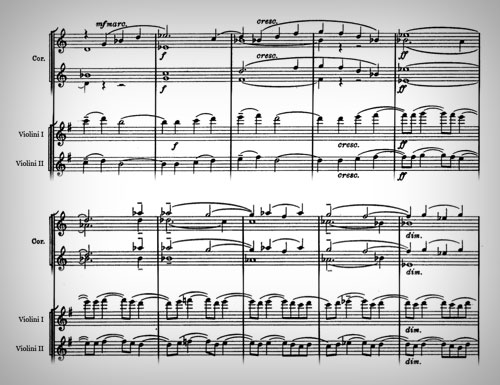 There’s something about the horn in its upper range that gives it a distant and suspended quality that is free of the edginess with which brass sometimes are (unjustly) associated.  Actually, this is the reason why the solitary horn call is in general so haunting and such an effective orchestral element.  Though Rachmaninoff voices this particular passage for the whole horn section, it is dominated by the counter-melody in the first and third horns, which moves decidedly when the melody does not.  Parts of it have an unambiguous arch to them, and the overall shape of the line is defined by gradual, step-wise motion.

The emotionality inherent in this passage is really beyond my words. Give it a listen if you have the chance.

There are a few other examples from Rachmaninoff’s oeuvre that I’ve been entertaining in the back of my mind.  The most obvious to me is a conspicuously optimistic interlude early on in the third movement of his fourth concerto, where the first horn ascends and gradually descends a D-flat major pentatonic scale.  There are also fleeting moments in his choral symphony The Bells and in his baritone cantata Spring where the horn assumes a descant-like role, albeit with less interesting parts (in some cases, just a well placed, sustained pitch).

This is what imbues Rachmaninoff’s music with an aesthetic that I’m at a loss to describe as anything but heavenly.  Composers of the Romantic period all wrote soulful tunes and melodies for the classical radio, but few captured an emotional palette as complex as Rachmaninoff’s orchestral coloring.  A unifying characteristic of these descant-like moments is that many of them signify release or resolution after a swell of harmonic ambiguity or even cacophony — a musical eye-of-the-storm in some contexts or, in others, just a momentary repose.

To me, these are moments that communicate a sense of serenity and clarity, which, given the modern, post-Romantic, serialist landscape in which they were conceived, is refreshing.