I bought my tickets for last night’s concert with the San Francisco Symphony last fall when I was under the spell of an almost child-like excitement over this season’s programming of popular masterworks.  In particular, the 2009-2010 season has seen the symphonies of Tchaikovsky, Mahler, and Rachmaninoff, as well as a few other big names from the middle Romantic era. 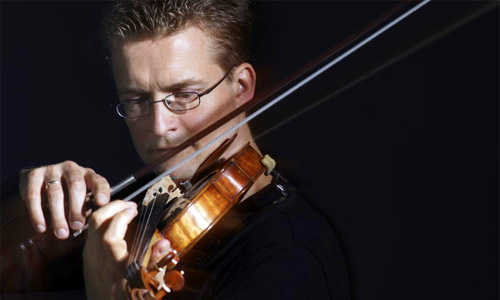 The piece from last night’s concert that motivated my purchase was Tchaikovsky’s violin concerto, performed by Christian Tetzlaff—a violinist of modest stature with a powerful sound.  The performance generally matched my expectations of the piece, though Tetzlaff took the first movement cadenza and a few other passages at a much faster pace than most of the recordings I have heard.  It didn’t, however, sound like a reading by Heifetz, who is praised (and occasionally criticized) in many an Amazon product review for his breakneck performance of this piece with Fritz Reiner conducting.  To me, Heifetz was more scrupulous and calculated, if you will, about his articulations.  Tetzlaff hammered through with unbridled verve. Despite the concerto being my initial reason for attending the concert, my experience was really sculpted by the other parts of the program, including a new work called Post-Scriptum by Victor Kissine, Ravel’s Valses nobles et sentimentales, and Liszt’s tone poem Tasso: Lamento e trionfo. The new work by Kissine saw its world premiere last night.  The piece was somewhat tonal, but dissonant throughout, with every emerging trace of melodic clarity stamped out by percussive inquietude.  There were more delicate moments too that brought forth the spirit of a horror movie, and in fact, there was at least one place in the piece where the bow of a contrabass was drawn vertically across the outer edge of a suspended cymbal to produce the same eerie squeal that you might hear in The Ring or F.E.A.R (yes, the video game).

Apart from the time I played the Ma mère l’oye orchestral suite with PYMO, this was the first time I had heard an orchestral work by Ravel performed live. Not that I ever doubted it, but I now believe fully in the composer’s genius in orchestration, which is manifest only partially in even the best recordings. And recordings just don’t do justice to the truly jubilant (and utterly loud) moments in the Valses. As far as conductors go, MTT maintains a pretty conservative presence at the podium, but he still manages to generate a huge sound from his musicians. The tone poem by Liszt that closed the program reminded me of something I once read, regarding a tone poem by Tchaikovsky.  At the time of this writing, the Wikipedia article on Tchaikovsky’s program work after Francesca Da Rimini mentions that its “swirling chromaticism” may suggest the influence of Liszt.  Wherever this claim originated, it is likely that the author had Tasso: Lamento e trionfo in mind.  Descending, chromatic motifs from this piece, as well as an overall, aggravated tone, are echoed frequently in Tchaikovsky’s piece.  My predilection for the Russian composer’s style must have preempted my ability to digest Tasso though, as its capricious emotional landscape literally left me a little confused.