Tchaikovsky’s last three symphonies are probably the most performed and recorded symphonies in existence.  Other contenders include those of Beethoven, Mozart, and maybe Haydn by virtue of there being over a hundred of them, but the trinity that is Tchaikovsky’s four, five, and six delivers a sampling of Romanticism that has proven irresistible to popular taste. Brahms might be worth mentioning too, had he left us more than four to choose from. 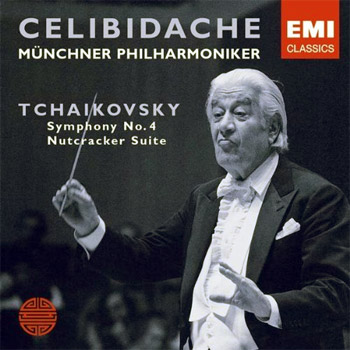 However, while there are countless recordings of these symphonies on the market, I think we’ve all grown accustomed to hearing a certain kind of Tchaikovsky.  That is, few times have my ears ever been challenged by a noticeably divergent interpretation of these pieces.  A fifteen minute first movement of the fifth symphony, for example, is standard fare.

Or at least this was the case it seemed until I discovered the recordings of these symphonies performed by Romanian conductor Sergui Celibidache with the Munich Philharmonic.  There are certainly a few things that make these recordings special, but the first thing I’ll mention is the most obvious: the track lengths listed on the back of each album case immediately indicate just how slow he takes these pieces.  His recorded performance of the fourth symphony, for example, lasts a staggering 56′25″.  The only other recording (that I know of) that even comes remotely close to this is Leonard Bernstein’s recording with the New York Philharmonic, clocking in at roughly 48 minutes.

But of course, raw length doesn’t say much about any performance beyond vaguely describing the tempo.  In fact, while it may be common to apply a deliberate slowness to Tchaikovsky’s music for gross emotional flavoring, this probably wasn’t Celibidache’s intent.  The late conductor’s son explains his father’s philosophy:

According to my father, the tempo of a specific piece is not given by a metronome number but depends much rather on other criteria in the score and on the acoustic of a hall.  This tempo fluctuates according to the complexity of the notes and their epiphenomena.  In short, more notes need more time to develop and return (to the ear).  The richer the music, the slower the tempo.

This is a decidedly intellectual approach to performing music, but a fitting one for a conductor who committed to creating unique, enriching experiences for himself, the musicians, and the audience.  Unfortunately, the intricacies are mostly lost in the translation of real sound to electrical signals for those of us forced to relive the event through iTunes.  Celibidache likewise frowned sternly upon recorded music, believing it to be an encumbrance to one’s spontaneity and in general a watered-down, unflattering rendering of the total experience.  These recordings were thus produced and released posthumously by his son.

What we hear in these recordings is extremely passionate music, but I’m almost ashamed to say it given that this is simply the nature of Tchaikovsky’s music.  Merely relaxing the tempo could not alone explain the effectiveness of Celibidache’s conducting, but I will say that the dauntingly lachrymose finale of the sixth symphony is especially effective at this pace.

I’ll dispense with any attempt to qualitatively describe Celibidache’s performances in words; frankly, I’ve never been satisfied with any kind of language that attempts to communicate musical feeling (the kind you find in concert program notes, for example).  It just sounds silly and overworked to me.  I’ll simply recommend that you give at least one of these recordings a dedicated listen, uninterrupted, from beginning to end, and hopefully on a device with respectable audio capabilities (i.e. your laptop speakers won’t do).  A conductor who didn’t believe in recorded music deserves at least that much.